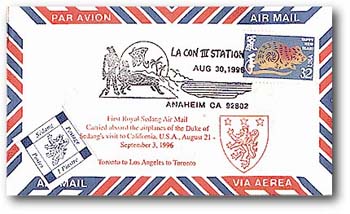 The court of nobility of Sedang became the first nobles in exile to fly their own airmail, which was also Sedang’s first airmail. The first airmail of the Royal Sedang Post consisted of 150 covers flown aboard the airplanes used by the Duke of Sedang during his visit to California in August-September 1996. Each cover was backstamped on August 21, 1996 at the start of the Duke’s visit and was flown from Toronto to Los Angeles with the Duke on August 21. The covers travelled with the Duke to Anaheim, California, where U.S. stamps (the Year of the Rat issue) were affixed and cancelled with the special USPS cancellation used at the postal station at LACon III (World Science Fiction Convention). The LACon III cancellation was used by its postal station for only one day (August 30, 1996). The covers were flown from Los Angeles to Toronto with the Duke on September 3, 1996 and backstamped upon arrival in Toronto. The Sedang 1-piastre stamp was cancelled with a special cancellation commemorating the first airmail and the Duke’s visit to California. Only 150 covers were carried. Each cover is signed by the Duke and numbered on the reverse. These are important historical covers bearing scarce cancellations of two countries. 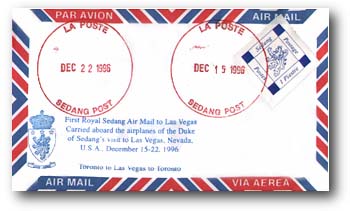 Payment may be made in either U.S. or Canadian currency. Prices in Canadian dollars may fluctuate with the exchange rate. Please pay by cheque, money order or bank draft payable to Derwin Mak. Please include U.S.$2.00 for postage & handling.